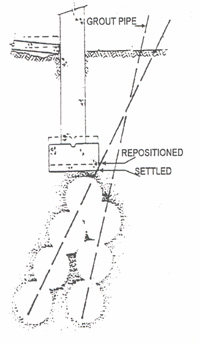 Compaction grouting, sometimes called “low mobility grouting,” is a soil stabilization technique that can be used to improve the load-bearing properties of soil underneath new and existing structures, whether buildings, bridges or roads. Probably the most versatile of the grouting methods, any soil that can be mechanically compacted can be densified by this technique. Compaction grouting technology displaces and densifies loose granular soils, reinforces fine-grained soils and stabilizes subsurface voids and sinkholes. Compaction grouting became a standard approach to soil and site preparation because it is so much more economical and efficient than removal and replacement or pilings. It is also easier to execute on any building site where access is difficult and space is limited. Many projects have been performed from within existing structures.

Put simply, compaction grouting works by placing a series of properly formulated grout bulbs or columns into the ground, displacing and compacting the surrounding soils to improve their ability to support existing structures or new construction.

Each soil situation is different. Each of our engagements requires a site-specific design due to varying soil properties and performance criteria. We vary the placement and shape of injected grout to meet the needs of the specific structures to be placed on that soil. Injection pipe spacing, stage depths, pumping pressures, pumping rates, mix design, and grout quantities are all essential elements we must consider. 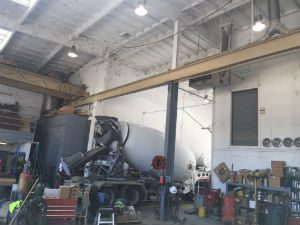 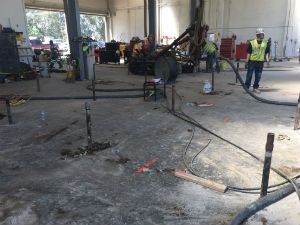 Compaction grouting has been used since the 1950s. Originally developed just to help control building settlement, the process and technology has improved to the point where it is now used in a wide range of soil conditions, improving all sorts of subsurface conditions to support new and remedial construction. Soil challenges could include rubble fills, poorly placed fills, loosened or collapsible soils, sinkhole sites, and liquefiable soils.

COMPACTION GROUTING CAN BE USED FOR: